Interesting things I found along the way-you never know. 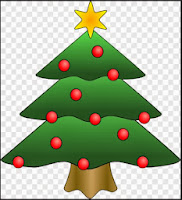 This is the time to bring out family traditions we treasurefor many years.


My family celebrates what we call First Night. It is the first Saturday in December when we put up our artificial tree and decorate the house. That night we keep the tree lights on, bundle up and sleep under the tree with the fireplace warming the room.


It is a wonderful way to celebrate the beginning of a special month.
Posted by Janet Lynn at 9:16 AM No comments: 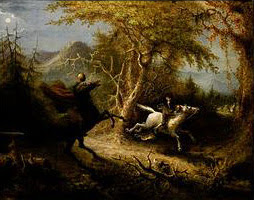 Being a native of New York, the story of the Headless Horseman is a regular tale told during Halloween. There are many adaptions of the Washington Irving’s Legend of Sleepy Hollow, but did you know the original tale was a Celtic folklore. He was a headless Iris Fairy that rode a black horse. Whenever he stopped, someone died.
Brothers Grimm had two versions, both featuring a headless horseman wearing a long gray coat, riding a large gray horse warning riders not ride or meet certain death.
The American version is Geoffrey Crayon, Gentleman. He was a Hessian, one of 51 who were hired to suppress the American Revolution. He was killed, decapitated by an American cannonball during the battle of Chatterton Hill, Long Island, New York and was buried in a church yard.

One must wonder if he was buried with his own head or someone else’s?

Posted by Janet Lynn at 9:54 AM No comments: 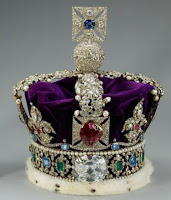 I was enthralled by the story of the Black Prince’s Ruby on my trip to England in 1990.


The Three Sister’s Ruby Ring, in South of the Pier, was taken from the true historical account of the Black Prince’s Ruby.


The history of the Black Prince’s Ruby history is an amazing adventure! The full account of the ring will send chills through you as you read the historical account of this 170 carat spinel ruby. It has a most bloody trail of conquest beginning in 1366.


Originally owned by the Moorish Prince Mohammad, who was killed by his brother-in-law Abu Said. Said was then murdered by a Spaniard, Lord Don Pedro the Cruel. This is where the name the Black Prince’s Ruby got its name in the 14th Century. It has been speculated that it was mined in the Badakhshan Mines in Tajikstan.


The astonishing journey of this jewel is filled with blood, horror, war and conquest.  It’s a history of instability, of human greatness and misfortune to those who own or hold it dear to them.


The Black Prince’s Ruby now sits as the center jewel in the British Imperial State Crown. The ruby is huge, the size of a small egg!


I took literary license with the Three Sister’s Ruby Ring, but the intrigue and extraordinary gem’s history is something people have written about for centuries.


Be sure to visit websites on the Black Prince’s Ruby for more information of this amazing true story.
Posted by Janet Lynn at 10:32 AM No comments:

One of our favorite dishes in Hawaii is Lomi Salmon. We’ve gorged ourselves on it every visit. Recently we have been able to find this dish in specialty restaurants and stores. But before that we made our own.


Sometimes the salmon is salty enough; taste it first before adding any salt. If the fish is excessively salty, you can soak it over night and rinse prior to preparing this dish.
Posted by Janet Lynn at 11:02 AM No comments: 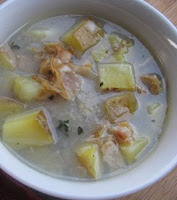 During a trip to the northeast coast to see the fall colors, we stopped off for lunch in Connecticut. It was a cold, blustery October afternoon, a bowl of chowder was in order. We had a choice of three clam chowders, Boston, New England or Rhode Island chowder. We knew the first two but had no idea of the latter. So we tried it, only to fall in love with it. RI chowder is a delicate blend of flavors not found in the more popular ones of clam chowder. We got the recipe and have made it ever since.
Rhode Island Clam Chowder
2 Tbsp butter
2Tbsp olive oil
1 large onion, diced
2 stalks celery, diced
1 large Idaho potato, peeled and diced
1 quart clam broth
1 Tbsp fresh thyme leaves
1 lb minced clams
½ tsp kosher salt
½ tsp fresh black pepper
In a Dutch oven or heavy stock pot, melt the butter in the oil over low-medium heat. Add the onion and celery, and sauté for 2-3 minutes until the onions are translucent. Stir in the diced potato, then pour into the clam broth and add thyme leaves.


Bring the soup to a boil, then reduce heat to low and simmer for 10 minutes or until the potatoes are soft when pierced with knife. Using a wooden spoon, smash some of the potatoes against the side of the pot, and stir into the broth to thicken it slightly. Add the clams with any juice, and cook over low heat for 5 minutes. Season with salt and pepper, and serve hot.  Serves 6
Posted by Janet Lynn at 7:56 PM 2 comments: 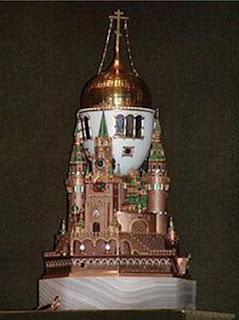 My time in Moscow included a beautiful trip to the Kremlin Armory. Fabergé eggs were on display. I was caught by the delicate craftsmanship of the intricately adorned eggs.
Though I was struck by the beauty and decoration of the Fabergé eggs, I chose to use a 19th century cigar case as the object of adventure for Charlotte Russe. The research into the use of cloisonné in art by Russian craftsmen was an amazing journey. But the history of Fabergé Eggs by House of Fabergé is fascinating. See the links below:

My favorite egg on display was the Moscow Kremlin Egg made 1906 by Carl Fabergé for Tsar Nicholas II for his wife. It is a music box made of onyx, gold, enamel and glass.
Posted by Janet Lynn at 5:10 PM No comments:

I fell in love with Green Goddess Dressing on our honeymoon to San Francisco in 1972. It took a while for me to find it in the grocery stores, but it didn’t taste as good as the homemade dressing. From what I understand it originated with the executive chef at the Palace Hotel in 1923 which was a variation of a French sauce traditionally served with Eel. Enjoy!! 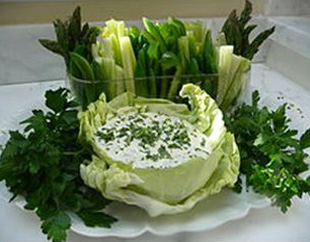 2 tsp anchovy past or 2-4 canned anchovies
1 small garlic clove, minced
½ to 1 cup slightly mashed avocado
1/3 cup mayonnaise
¾ cups sour cream
½ cut chopped fresh parsley
¼ cup chopped fresh tarragon or fresh chopped basil
3 Tbsp  chopped chives
2 Tbsp lemon juice
Sal and black pepper to taste
Sweetener to taste
Put all the ingredients in the bowl of a blender or food processor and blend or pulse until you get an even smooth dressing, about 30-45 seconds. Serve as a dip or toss with salad greens. The dressing will last about a week in the refrigerator. Makes 2-3 cups.

These are wonderful recipes that are typical Guatemalan fare. Enjoy!


Start by cutting the pork and chicken meat into small cubes. Cook it on a big pot with salt, half an onion, a tomato cut in half, a clove of garlic and two and a half cups of water.


While you wait take the pumpkin seeds and toast them on an old pan at a low setting until they are brown. Repeat with the sesame seeds, the onion and the garlic. When it comes to cilantro only dry it a bit on the pan – don’t let it get brown. Then the tomatoes – let them sit on the pan and move them every couple of minutes until the point where they can easily be pealed.
When the meat is cooked take the broth that is left, let it cool and scrape all the fat from the surface. Then take the tomatoes, cilantro, garlic, onion, sesame seeds & pumpkin seeds and put them on the blender along with the broth. Blend for at least 1.5min. You should get a brown, spicy salsa.
Peel and cut into small pieces the green chayote and the potatoes.
Take a big pot and put the meat, the salsa, the chayote & the potatoes in it. Let it boil for around 15min and try it so see if it needs more salt. Adjust it however you like. Then let it boil for another 15min at a low setting. And you are done!
Guatemalan’s serve it with white rice & corn tortillas
*Güaque pepper (sometimes called huaques) peppers from Guatemala. You may be substituted the Güaque peppers with Guajillo chili or any other peppers with a mild, sweet flavor.

Janet Lynn
Janet has been writing for 10 years and writes mysteries and romantic comedy. She has traveled to the far corners of the globe for work and pleasure. A semi retired clinical speech pathologist she loves to garden and play with her 5 year old niece Jenny. She lives in Southern California with her husband, Bill.